According to the American Cancer Society (ACS), a woman living in the United States has a 1 in 8 chance of developing breast cancer, the second-leading cause of cancer death in women (behind only lung cancer). Despite advances in treatment, about 30% of women initially diagnosed with early-stage breast cancer will have a recurrence or experience metastatic disease.[i] Moreover, while certain types of metastatic breast cancer can be well managed in the long term, the disease is not curable.

Fortunately, women (and men) living with breast cancer today can take advantage of recent therapeutic advances, and there are numerous clinical trials seeking patients with advanced or metastatic breast cancer. Tools such as the FDA’s Real-Time Oncology Review (RTOR) pilot program – which aims to get quality drugs to patients faster – and patient-empowered advocacy groups are also helping to facilitate patient access to safe and effective treatments. Additionally, services such as Breastcancertrials.org allow patients to search for open clinical trials of new therapies that target their specific tumor sub-types. Many of these therapies have been discovered through innovations in molecular profiling, in tandem with advanced diagnostic technologies that enable matching of targeted therapy to a tumor’s specific molecular signature.

However, despite such 21st century innovations, clinical trial design and execution remain a decidedly 20th century proposition. Clinical development has to catch up with advances in scientific understanding, patient advocacy, and regulatory oversight. It is no longer sufficient to rely solely on drug discovery as a tool in the fight against breast cancer. Given the availability of advanced technologies that can make clinical trial planning more precise and efficient, it is unproductive – some might say unethical — not to use them.

Even a successful breast cancer trial can be burdened by inefficiencies. One recently completed 500-patient trial for an innovative metastatic breast cancer therapy activated 315 investigator sites but only 198 of those sites recruited any patients; 50 of them recruited only one patient apiece. If we estimate at least $50,000 in activation and monitoring costs per site, that amounts to $5.5 million wasted on non-enrolling sites, plus another $2.5 million for sites enrolling only one patient. When costs for drug distribution are factored in, the aggregate costs for the inefficient trial sites approach $10 million. More importantly, despite best intentions such inefficiencies can result in delayed patient access.

The therapy evaluated in that trial received FDA approval under the RTOR program, which was a victory for patients in need. However, our retrospective analysis suggests that clinical development in this instance could have been more efficient in terms of time, money, and human resources. Why is this? 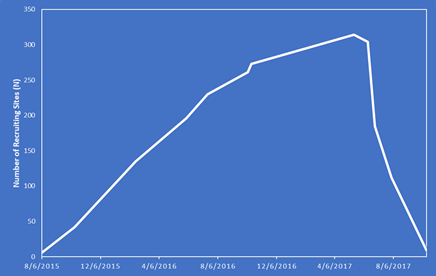 A closer look at this multi-country trial reveals that sites in 12 of the 35 countries contributed neither meaningful numbers of patients nor a reasonable gross site enrollment rate (GSER, defined as the number of patients per site per month), as shown in the following diagram – where each bubble represents a country that participated in this trial. The size of the bubble shows the duration of enrollment in that country. The curve shows the median performance. The red colored bubbles show those poor performing countries. 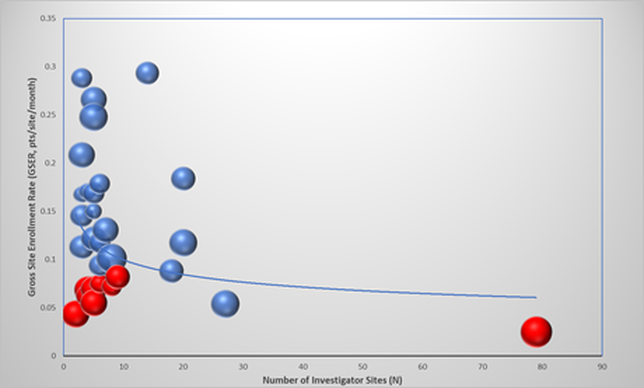 Although there are many reasons to use or not use sites in certain countries, historic GSER rates allow a sponsor to better estimate overall enrollment cycle time (ECT) depending on the mix of countries chosen. As the following table shows, GSERs in this trial ranged from 0.02 in the U.S. to almost twenty times that rate in Japan (0.29). GSERs and ECTs were particularly disappointing in countries such as Romania, Brazil, and Portugal, where sites have generally been more efficient at recruiting patients.

Hindsight, as they say, is 20/20, but we can’t help but think we could have easily reduced the trial sponsor’s costs substantially by using AI-driven tools such as ClinSite™ to select the right countries and the best-performing sites. We also suspect we could have identified design inefficiencies had we been involved in trial planning.

But the point is that no matter which service provider you choose, your 21st century trial needs 21st century data-driven analytics. This is especially so for a trial in metastatic breast cancer, a therapeutic area that has benefited from advances in molecular profiling, targeted therapy, and clinical trial matching, but which remains underserved in terms of advanced analytics. If we can fill in this missing piece in the clinical development armamentarium, we can help deliver safe and effective treatments to patients at a faster rate than is currently the case. Smarter trials mean faster patient access. 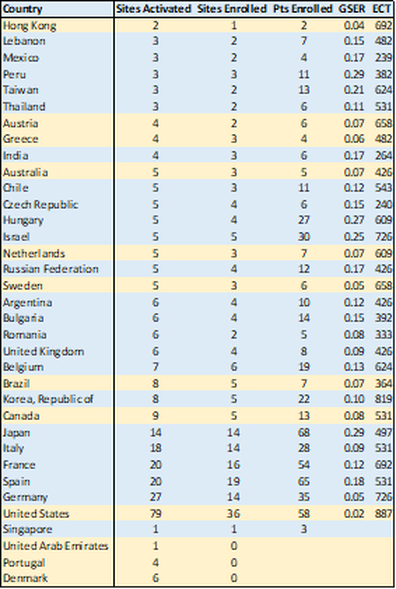