Analysis reveals rapid rate of decline in Alzheimer’s patients with 18% loss in cognitive function over just a 12-month period; highlighting importance of patient-centric trial design based on accurate data modelling

Boston, USA, 21st September 2022: Phesi Inc., a clinical development data science solution provider has published a new analysis of 117,463 Alzheimer’s patients on World Alzheimer’s Day 2022. Phesi identified 117,463 patients who participated in disease modifying trials from its database of more than 60 million patients; such a large sample size represents a significant portion of the patient population. The Phesi analysis lays bare the precipitous decline that occurs in Alzheimer’s patients over just a single 12-month period, with the average 72-year-old suffering from Alzheimer’s losing 18% of cognitive function (measured by MMSE) in just 12 months.

“Despite the many years and billions of dollars invested, progress in therapeutics for this terrible disease has been extremely slow. Alzheimer’s is a complex and very difficult hill to climb for pharmaceutical companies. But, on this year’s World Alzheimer’s Day, we are calling on organizations to urgently revisit the vast volumes of data that we have accumulated  on this disease to identify new insights,” commented Dr Gen Li, CEO and Founder, Phesi. “Our analysis of such data shows starkly that cognitive decline occurs very quickly in patients who have only just entered their seventies. Once the disease has taken hold, it creates an avalanche of decline in patients. The data clearly show us that to arrest that decline we must intervene earlier. The industry’s research efforts must focus on including patients as young as 50 and adopting a preventative approach to therapeutics.”

The MMSE (Mini‐Mental State Examination; Folstein, 1975), is a commonly used pen‐and‐paper test of cognitive function, with a total possible score of 30 points. Phesi allocated the 117,463 patients in its study into four separate cohorts according to their average MMSE score, ranked from high to low (fig.1). It then analyzed the ages of patients in these cohorts grouped by MMSE scores and calculated their average age and standard deviation (fig.2). Taking the example of cohort two with the average age of 72.7 years old – in 12 months (between 72.7 – 71.5 years old), MMSE drops from 27.2 to 21.8; in 24 months (73.6 – 71.5 years old), MMSE drops further to 18.4. This represents a 20% loss of cognitive function in 12 months.

“Governments and the clinical development industry are continuing to invest huge amounts of money, time and resources in understanding the causes of Alzheimer’s. By coupling the considerable body of knowledge acquired on the disease with advances in technology that enable us to make sense of this information, new breakthroughs become possible. This includes data from trials that have “failed”. Because we will not only learn from trials deemed successful but from the nuggets of critical information buried in discarded data from those failed trials. The priority for clinical development should be revisiting historical data to identify those hidden insights. Such insights will reveal new research leads and enable the design of patient-centric trials that include younger participants and patients from pre-symptomatic high-risk groups. Alzheimer’s and other neurodegenerative conditions are a huge burden on society, and greatly impact the quality of life of our aging global population. A preventative treatment is desperately needed. The general public can also learn from our findings – we would encourage younger people to volunteer for Alzheimer’s trials to contribute to driving R&D forward,” commented Dr Li.

Phesi’s future plans in this area include constructing digital twins for a specific Alzheimer’s clinical trial. This could potentially lead to synthetic control arm and reduce or eliminate the need for placebo treatments to be given and accelerate the R&D timeline. It welcomes approaches from research partners and investigators in this field.

Phesi’s established conceptual framework has been developed over the past 15 years. The Phesi team uses its AI-driven integrated data platform to collate data from 60 million patient records and 485,000 clinical trial records across more than 4,000 human diseases. This data set facilitates accurate and real-time scenario modelling to enable companies and trial planners to design clinical trials with the highest chance of success, develop synthetic patient profiles, and digital twins. Visit the website for more information. 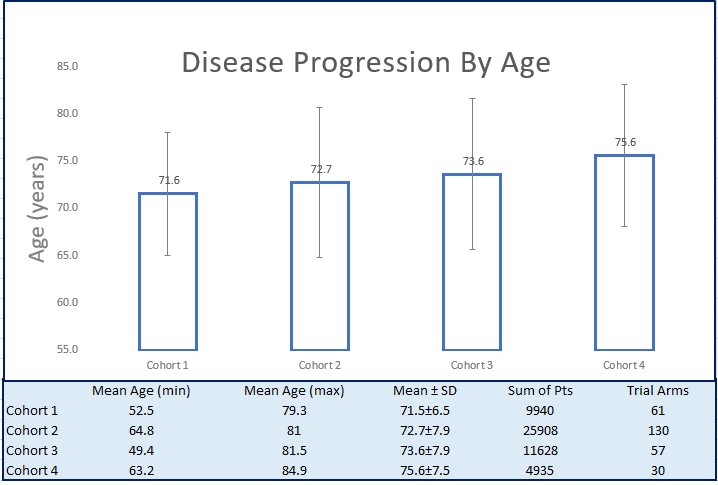 Related news
48% of US cancer clinical trials have no Hispanic or Latin American representation, and 42% do not include a single Black patient, Phesi analysis reveals Read more
Use of digital twins will be essential in accelerating the use of CAR-T in cancer treatment and mitigating the side effects, says Phesi Read more
Phesi global analysis of 2.5 million patients finds participants in breast cancer clinical trials are getting younger Read more
New Phesi data highlights potential long-lasting impact from war in Ukraine on global clinical development Read more
Only 14% of breast cancer trials reached optimal enrolment targets in 2021, despite being the most studied indication globally Read more
New Phesi global analysis shows breast cancer was the most extensively studied disease area in 2021 Read more